I often crack out the oven gloves and mixing bowl at Christmas, in fact it’s probably the only time of year I actually bake. Something about Christmas makes me crave cinnamon and spiced everything, and medieval recipes are great for that; they loved their spices, in sweet and savoury dishes. Cinnamon, cloves, nutmeg and the like were used year round, but particularly at Christmas, and that tradition has held firm over the years. If you’re reaching for the wooden spoon this Christmas week, why not try one of these recipes?

Gyngerbrede (15th century)
Gingerbread is a Christmas classic and has been for a very long time, however the medieval version is less cake or biscuit like in texture than the modern gingerbread we’re used to, the recipe produces something closer to sugar candy. More on it, including a modernised recipe, can be found here.

Translation:
Take wine and cinnamon, & a great deal of white sugar, and set it on the fire and heat it hot, but don’t let boil, and strain; then take fair dates, and pick out the stones, and cut thin, & add; then take pears, and pare them and boil them, and cut them in thin slices, and place in the syrup; then take a little sandalwood, and add, and set it on the fire; and if you have quinces, add them, and look that it stand well with sugar, and well laid with cinnamon, and add salt, and let it boil; and put it in a wooden container, & let it cool, and serve.

Translation:
Take pork, & hack it small, & eggs beaten together, & a little Milk, & mix it together with Honey & Pepper, & bake it in a pie shell, & serve forth. 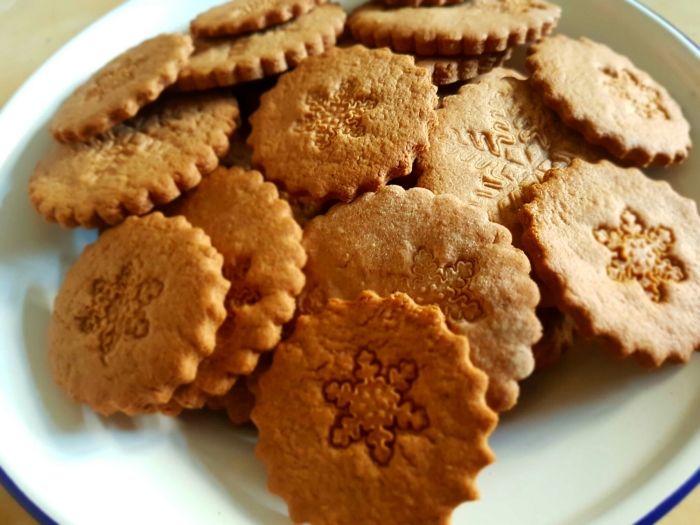 This year I had a go at making Speculoos (Dutch: Speculaas, German: Spekulatious), traditional biscuits common in Belgium and The Netherlands. If you’re familiar with Lotus Biscoff biscuits or spread, you’ll know what I mean. Biscoff has become the popular brand name, whilst the Speculoos biscuit itself is much older. The thin, caramelised, spiced biscuits were traditionally made in wooden moulds which pressed festive designs into the dough such as saints and nativity figures, and given on the 6th of December, the feast day of St Nicholas. Spices were readily available to those who could afford them owing to the Dutch East India Company which flourished in the 1400’s and 1500’s. Families would often adapt the recipe to their unique tastes. You can of course do the same and add or remove spices as you prefer. Some recipes use more sugar for a more caramelised flavour. Personally, I’ll go for fewer cloves next time. I didn’t manage to find an original recipe, but the one I followed can be found here. In keeping with the tradition of imprinting designs onto them, I decided to stamp little snowflakes into them before baking.

Drinks
If baking isn’t your thing, or you want something wash down your baked treats with, why not try a medieval drink, like Ypocras, mulled wine with spices and honey, or Lambswool, cider with spices and a frothy top, commonly used for wassailing, a Celtic tradition which took place on Twelfth Night. Meaning ‘be healthy’, a wassail cup was passed around, and a toast said to each persons health as they drank. Apple trees were also wassailed to bring a good harvest next year.

This is a text widget. The Text Widget allows you to add text or HTML to your sidebar. You can use a text widget to display text, links, images, HTML, or a combination of these. Edit them in the Widget section of the Customizer.

Pique is a one-page scrolling theme designed to show your business in its best light. There are three optional widget areas in the footer where you can put any content you like. This is the perfect place to add extra information like social links, opening hours, or contact information.

This is a text widget. The Text Widget allows you to add text or HTML to your sidebar. You can use a text widget to display text, links, images, HTML, or a combination of these. Edit them in the Widget section of the Customizer.
Loading Comments...
%d bloggers like this: